One day, I was at school, which is normally not very interesting except for recess. Actually, that day was not interesting either. Only lunch time was.

I didn’t pack my own lunch because ForestPoodle88 (which has to spelled out in full in a story, who knows why) gave me a new thermos because I didn’t have one and she didn’t want me to see it until lunch. Okay, fine.

So I went to school and recess was great. I got to play outside in the snow and I snuck up to the snow pile even though we’re not supposed to. I even got to slide down it three times before we were caught. And then the bell rang, which is no fun.

It was lunchtime, so I got out my lunch, doo, doo, doo, duh, doo . . . and there was a minion in my lunch bag. No, don’t freak out, it wasn’t real. It would have been really cool if it was, but no. It was . . . I don’t know, plastic? metal? Something. It’s  really nice though. It’s got one eye, and overalls and the Gru symbol and everything. Plus, I like minions.

Because the rest of my lunch bag had a container of green olives and another of grapes, I guessed it was my thermos. Green olives don’t look like a thermos, so you know, there’s that.

But I couldn’t get my thermos open. It was kinda hot and the lid was sticking and I didn’t even know where the lid was, so it didn’t work.

So I took it to my teacher, Mr. Han, and asked him if he could get it open. He took it, looked at it, and said, “That’s not a thermos, Sophie. You can’t put food in a toy!”

And I said, “ForestPoodle88 (well, I didn’t actually say that, but blogs, you know) packed my lunch and she told me my new thermos was in it. Grapes and green olives are not thermoses. This has to be it. And I can’t get it open.”

And so he said,” I’m sorry, Sophie, this isn’t a thermos. It’s a very cute minion toy, but not a thermos. Why don’t we find you something else to eat?”

My friend Zuzu heard all this, so she said to me, “Here, give me your thermos. I’ll try to open it.” I didn’t think Zuzu could do it because it really wasn’t working, but I gave it to her anyway. She tried and tried, but she couldn’t do it. So my other friend Anna tried. No luck. Asha tried. She couldn’t do it either. Lots more people tried – Mei, Helena, Farhan, Mandisha, Leo, Marvin, everyone. 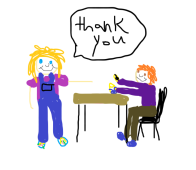 Finally Cam said from the other side of the class, “I’ll try.” So my thermos was passed around the class again. Well, Cam got it open and nearly spilled my lunch, but it was all okay. I told Cam thank you and started eating my macaroni and cheese.

Except then the bell rang. So I went up to Mr. Han again, showed him my open thermos and asked if I could keep eating. He said yes, but he was very surprised that it actually was a thermos.

Hi! I’m Forest-Poodle88, a teenage doll lover and admirer of anything cute. I blog about doll DIYs, cool crafts and phenomenal photo stories. (Okay, maybe ‘phenomenal’ is not the right word, but what other good adjective really starts with ‘ph’?!) Check out the About Me page for more!